Ron Paul 2012, the delegates and winning back the country…

We all know the fraud & chicanery going on within the RNC and the Republican primaries throughout the country.  While Ron Paul might make it to the Tampa there’s already talk of the state committees effecting an insurgency to unseat his delegates before they can vote.  There’s already statements from the leader of the Republican National Committee that Romney’s people and the RNC are opening communications in violation of national rules where he is their ‘presumptive’ nominee even though the primaries aren’t over.  What will happen is anyone’s guess.

If they find some illicite means to unseat Paul’s delegates in their on-going quest to seemingly ‘lose’ the election (such that no ‘Republican’ is at the helm when the country implodes) then they will do more damage to the party than holding the Presidency when the house of cards collapses.  As a lifelong Republican, it’s not surprising that the RNC doesn’t want to win.  Hell, I don’t think the party has even the remotest clue anymore what they stand for.  Going to the National GOP site and clicking on their page for ‘Issues’ (http://www.gop.com/index.php/issues/issues/) there’s only one.  “National Defense”.  Nothing at all about the economy, nothing about the rule of Law, nothing about reigning in big government or Wall Street, nothing about ANYTHING beyond “National Defense”.  So, I guess my being a lifelong Republican means I care not one wit about anything these days beyond providing my complete support and obedience to what Eisenhower termed “the military/industrial complex”.  Hmmm…  NOT.

Were I Dr. Paul, I would be fully prepared, when I arrived in Tampa, to to take the Republican Convention, all his supporters and delegates into the parking lot were the RNC (or their state minions) to “unseat” any Paul delegates.  I would be prepared to create a grass-roots, third party right in the parking lot of the Tampa Convention Center named something catchy like the ‘Liberty Party’.  Without question, Dr. Paul has the organization ‘on-the-ground’ to get his name on the state ballots under whatever new party he choses to form so it’s not like some up-hill race or great hurtle he would need to make.

What would the likely result be?  The Republican Party would implode from the publicized scandal of trying to ‘fix’ an election and subvert the will of rank and file Republicans.  They and their Wall Street candidate would find themselves scrambling to reorganize some semblance of national ‘organization’ after the Paul supporters (many in key positions) walked out.  The new (Liberty) party would leap on to the national stage with a better political organization and certainly more enthusiasm than either the Republicans or the Democrats could muster.

Everyone knows the broad support Paul garners from the youth, the older folks, folks still believing in our Constitution and our old Republic, the independent voters, the fed-up as well as most of the military rank & file – imagine the momentum!  I would venture to guess that a whole bunch of Democrats would switch sides to join a new party during this election cycle since, who could blame them with their only choices now being the lying usurper who can’t be trusted to fulfill even one (1) campaign promise or to choose the ‘other side’ offering yet another lying corporate weasel, sell-out.

Paul shouldn’t be concerned about splitting the party rather should (as he has) stand on principles.  Those supporting his run and the Liberties and Freedom at it’s foundation should also vote for no other reason than principles.  Paul and his supporters don’t need the ‘label’ of “Republican” to win this election; they simply need each other.

This is a struggle to regain control of our Republic from vested interests.  This is a struggle to reestablish the rule of Law – Constitutional Law to our nation.  That equates to a struggle to reign in big government and allow the People their God given Rights to decide their own paths and destinies.  If this struggle doesn’t result in success ‘this time’ there will likely not be a next time.  This isn’t about getting the powers that be in the Republican ‘leadership’ or ‘their’ candidate to spout Paul’s words or platforms only to disregard them once an election is won.  It’s about throwing the bums out on their asses and, once again, having the power in this nation reside in her People.  Failing that, I suggest you all get your passports updated and start looking for a new start somewhere else, as our forefathers did, when they saw their options crushed in their native lands and ‘got-out-of-Dodge’ before the shit hit the fan.

I thought I would comment on the regular emails from a variety of folks within the Paul campaign that I’ve been seeing.  Of note was one yesterday (16 May) from Paul’s ‘Chief Strategist’, Jesse Benton, whom I took the time to respond to.  After relating the the campaign wasn’t going to bother to “campaign” further, he stated that “our delegates can still make a major impact at the National Convention and beyond.”  He related (seemingly as a bonus) that “All delegates will be able to vote on party rules and allow us to shape the process for future liberty candidates.”  He sums up by stating “We are in an excellent position to make sure the Republican Party adds solid liberty issues to the GOP Platform, which our delegates will be directly positioned to approve.  Our campaign is presently working to get several items up for consideration, including monetary policy reform, prohibitions on indefinite detention, and Internet freedom.”

The ‘tone’ being set by Paul’s “Chief Strategist” appears to be that the movement or ‘revolution’ as it’s referred to should now be content to have an “impact” on the convention, that it should be content to “vote on party rules” and content to add “solid liberty issues” (which means craft platitudes) to the platform which will be bantered about by (apparently) the other guy.  It appears to me that there has been a relinquishment of the goal to ‘win’ the Presidency.

Later (yesterday) I received one from John Tate, Paul’s Campaign Manager whom I also took the time to respond to.  I asked him why the campaign uses phrases describing our goal as to “set the stage to not only make a tremendous impact on the direction of the Republican Party at Tampa, but to achieve lasting victory in the years to come“?  To any thinking person, who can read between the lines, there’s again the avoidance of stating they’re in this to WIN the presidency?  So, as I related in my email to John Tate, I’m getting a bad feeling from all this just as I did years ago when NH was defrauded out of a RP win and no one (in the campaign) stood up to fight. 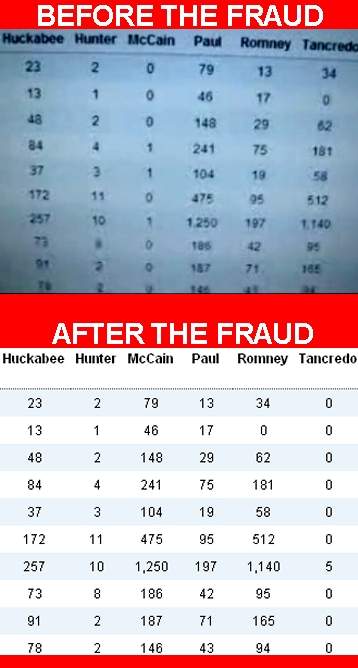 If it’s believed that sending delegates to Tampa to shape policy within an RNC/Romney play for the White House, (rather than to win) we’re truly screwed.  The “direction of the party” shouldn’t be the goal.  Taking the reigns of government should be.   I asked them “is this (was it ever?) about winning the Presidency and regaining control of our Republic or is it about ‘shaping’ “the process for future liberty candidates“?  Is it about returning the country to the rule of Law or ‘adding’ “solid liberty issues to the GOP Platform“?  So, is it just me or do these people have to get their heads screwed back on straight because it sure as hell looks to me that they are willing to roll over for an ‘advisory role’ establishing Romney’s GOP platform that will be kicked to the curb like yesterday’s newspaper after the election as has been every position the man has ever taken.

On the other hand we’re looking at a clear breach of RNC Rule 11 that’s taken place which could be used at Tampa to disqualify Romney using the RNC’s own rules.  We’re looking at RNC Rule 38 (championed by the RNC’s own legal counsel) which has the benefit of having already been used and it’s precedent set in a previous election, calling delegates “free agents” thus, all bound delegates can vote for whomever they wish rather than vote for Romney.  Call it the ‘nuclear option’ if you wish but if the movement’s/revolution’s goal was ‘winning the Presidency’ then use it.  Why did the campaign initiate the plan to secure RP delegates at the local levels if not to USE THEM?

Bottom line:  Fracturing the party be damned; either they’re going to fight for the Presidency and the Republic or they’re prepared to roll over without litigation or a fight and hope the RNC and Romney not only accept they’re platforms (useless platitudes from their perspective) and hope Romney won’t flip/flop after they’ve rolled over.  (Good luck on that one as it rather reminds me of “Yes We Can” and “Change You Can Believe In”)

As I said above “This isn’t about getting the powers that be in the Republican ‘leadership’ or ‘their’ candidate to spout Paul’s words or platforms only to disregard them once an election is won. It’s about throwing the bums out on their asses and, once again, having the power in this nation reside in her People.” These people should keep their eye on the ball which (I thought) was winning.  Play to win.  If the Republican nomination is beyond their grasp (in spite of Rule 38?) then I suggest someone grow some balls and announce the formation of a third party or stop asking us, who have given again and again, through two election cycles, for yet more money.

This entry was posted in Foreign Affairs, US Law and tagged 2012, delegates, primaries, Republicans, Ron Paul, Tampa. Bookmark the permalink.