by “the rocket’s red glare, the bombs bursting in air”

While I (and a good many other civilized people in the US and the planet) are appalled at the militaristic debauchery taking place in Gaza, apparently a good number of Israelis find it ‘uplifting’ and worthy of going out (like Americans might go out to watch our 4th of July fireworks) in order to enjoy the sights and sounds as bombs and missiles fall on the civilian population of the open air concentration camp known as ‘Gaza’.

Israelis fancy themselves a ‘cosmopolitan’ bunch.  These days they’re gathering on the hilltops surrounding Gaza at all hours, day & night, placing their lawn chairs and couches, packing their snacks and a few bottles of Porter Alon, perhaps a few Goldstars and maybe some Arak and enjoying the ‘show’ put on by their IDF that anyone with a conscience, anyone in the civilized world, recognizes as a slaughter.  If one’s goal in life was to become a sadist, these folks are freaking inspiring!

In July of 1861 there was a precedent.  An innumerable number of naïve civilians thought it might be good ‘theater’ to pack their picnic baskets and follow the Union Army out of Washington to watch, what they thought would be the climactic battle of a short lived rebellion of the southern states, out in in Manassas, Virginia or ‘Bull Run’ as they called it.  The Union had their ass handed to them and those sightseer’s found themselves squarely in the way of the Union Army’s retreat.

Back to the ‘cosmopolitan’ Israelis.  The photos below don’t need much in the way commentary.  They simply show ‘regular Israelis’ enjoying themselves, the explosions, the destruction and the murder of the civilian population that they keep penned up in Gaza.  Reach your own conclusions.  Clearly, it’s all grand ‘theater’ for them.

rac·ist: a person who believes that a particular race is superior to another.

gen·o·cide: the deliberate killing of a large group of people, especially those of a particular ethnic group or nation. 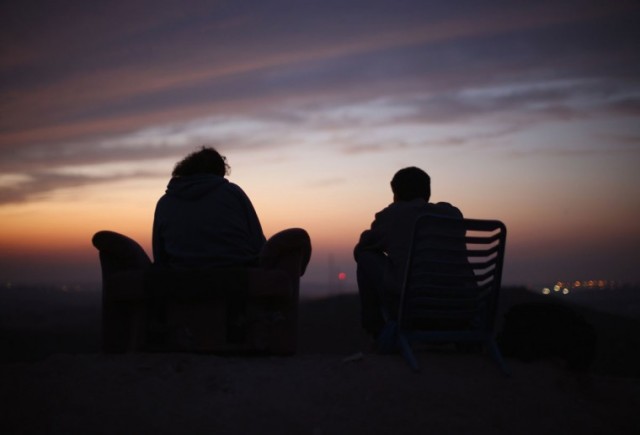 mo·ral·i·ty: principles concerning the distinction between right and wrong or good and bad behavior.

re·spon·si·bil·i·ty: the state or fact of having a duty to deal with something or of having control over someone.

bar·ba·rism: absence of culture and civilization.

For me, when I see the white phosphorus warheads detonating over the civilians, the indiscriminate bombardment of homes and infrastructure with high explosives and the physical results of flechette shells raining down on the urban center, I, oddly enough, think of America’s National Anthem.  Francis Scott Key wrote of witnessing the British attempt to crush the resistance at Fort McHenry in Maryland, of the relentless bombardment, of “the rockets’ red glare” and “the bombs bursting in air“.  Dawn had to come to ascertain if the ‘spark’ of resistance remained and Key saw ”by the dawn’s early light“ that McHenry’s ‘storm flag’ had been lowered some time in the dark of night and a huge 30 foot by 42 foot flag had been raised in its stead – what we Americans have, since that day, called our “Star Spangled Banner”.

I wonder, if someday, similar words might be written, by the proud, the undaunted, the undefeated and the ‘free’ Palestinians, about their experience in Gaza where, at the end of it all, their nation and people survived and they too stand in their own “land of the free and the home of the brave”.