Deutschland or Germanistan – maybe it’s not too late…

It’s sad to say that the current crisis in Germany and Europe at large, has been created by my country’s policies.  I won’t get into who’s interests the United States is actually protecting in the Middle East but it’s US policies and practice that’s spawned a deluge of Middle Easterners heading north like a locust plague.  Europe’s policy of following in lock step with Washington’s laying waste to the Middle East has also contributed to a very great degree to the events unfolding.

I find it interesting that Germans, as a people, have been so beaten down since 1945, so dominated by the victors, so ridden with manufactured guilt, that they have exhibited little of their national character, outside of ‘industry’, for some seventy years.  Suddenly, that’s changing.  Until now Germans have been America’s compliant doormat.  Perhaps that’s because there was never a peace treaty signed with Germany after the war ended.  Perhaps it was due to Germany being occupied essentially indefinately since the war ended.

Not since the end of World War 1 has there been such an uptic in their ‘Ausländerfeindlichkeit’ or hostility against foreigners now that millions of islamic refugees are storming the gates.  Something is changing dramatically.  The “Gastarbeiters” or guest workers that were acceptable once coupled with the millions coming from the decimated Middle East are now resulting in a paradigm shift within Germany and elsewhere.  Like the Mexicans (illegally) flowing by the thousands across the American border, the islamists are flowing by the hundreds of thousands into Germany thanks to Merkel’s open door policy.  Upon arrival, many, if not most, like the Mexicans here, want a free lunch and all the handouts they can get.  Sad to say, oddly, I don’t blame them.  Europe has itself to blame for allowing the US and Israel a free hand in disrupting the entire Middle East.  Now, they’re reaping what their leader’s lapdog behavior has sown.

In the 40s Europe was the site of an epic battle where the key players fought over which authoritarian ideology would prevail.  Today Europe will be the battleground again.    Not for mere ideology but over a clash of civilizations.  One side standing für die Freiheit while the other side for an uncompromising belief in an alien and dictatorial religion which, frankly, has no place in Europe.   But Germans are waking up.  The rank and file seem (at last) to be breaking lockstep with Washington and Germany’s compliant rulers in Berlin.  I’m not sure yet but they may just come off the leash over this immigrant invasion.  Wouldn’t it be about time? 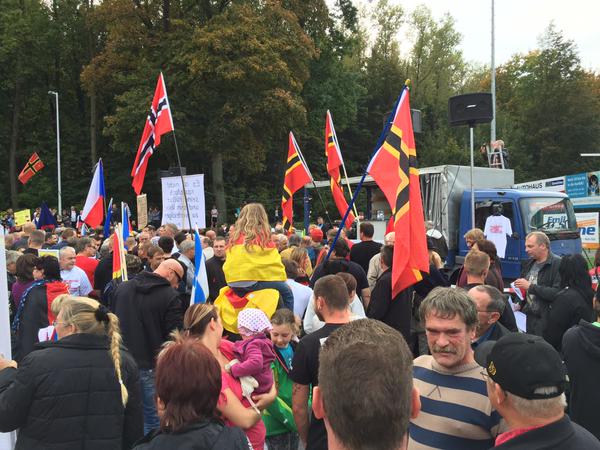 At rallies protesting the islamization/invasion of Germany and all of Europe, more and more often we’re seeing the people carrying an interesting variant of Germany’s national flag, the Wirmer ‘Resistance Flag’.  What’s very interesting is that this is the flag which, had Count von Stauffenberg been successful in overthrowing the Reich’s government in 1944, would have been the German Republic’s flag.  This says something.  Perhaps Germany’s population (of Germans) isn’t prepared to go quietly into the night.  Perhaps the German people are uncomfortable with this:

Perhaps the German people fear this: 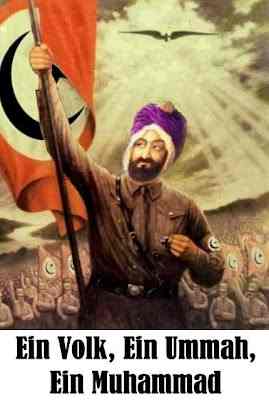 And well they should.  I read these flags popping up as a ‘statement’ or subliminal message to Berlin.  Germany may not be overrun easily.  Perhaps they’ve had enough.  Perhaps they’re regaining their cultural Germanic balls after seventy years of subservience.  The more Germans begin carrying these flags (of the resistance) the more the message resounds that Germany won’t be a vassal state much longer; perhaps that mindset will spread throughout Europe because I can’t believe Ausländerfeindlichkeit is limited to Germany.  Even the Swiss are being told by their newly minted Muslim communities that they are “offended” by the Christian inference of the white cross that’s integral to the Swiss flag and want the cross removed.  Is it just me or do others marvel at the arrogance of some of these people.  (Were this”inference” widespread among the islamic communities then we should expect demands that Denmark, Dominica, the Dominican Republic, England, Finland, Georgia, Greece, Iceland, Netherlands Antilles, Northern Ireland, Sweden as well as NATO reconfigure their flags to accommodate the any possible “offense”.)  My retort might be that if you’re “offended” by Christians perhaps you shouldn’t relocate to Christian countries.

My take on “diversity” is a bit at odds with that espoused by the globalist clowns who’ve initiated this mass migration, this invasion, into Europe and Germany.  To have and respect “diversity” on a cultural or racial or sociologic basis REQUIRES ‘different‘ cultures, races and sociologies not some amalgamation of or unification of every civilization and people where cultural uniqueness has been crushed and besmirched.  Diversity makes humanity stronger through the competition of ideas and thus, there’s nothing wrong with the concept of Ein Volk in any of the classical European nations be it Germany, Russia, Italy, etcetera.  If one wants diversity then defend these nation’s Right to exist as unique cultures, else there BE no diversity to respect.

As was pointed out by Fjordman in the April 2008 Brussels Journal:  “What we are dealing with is not “immigration” but colonization…”  It applies to the current crisis.  Germany, indeed all of Europe, can keep it’s culture or it can can be forced by political correctness to accept the globalists plans for it.  Given the fact that the majority headed for Germany/Europe are military age men with, I’m sure, a good number of jihadists thrown in for good measure, the plans these globalists have are nothing less than the destruction of the European powerblock and will have the same impact as would be the rise of the planet of the apes.

Will Germany wait until there are 10-20 million potential subversives and criminals present within its borders and they’re pressing ‘1’ or Arabic and ‘2’ for German, as is the case in my country, or will they take advantage of the fact that being ‘in’ Germany or even being ‘born in Germany’ doesn’t grant foreigners citizenship.

I hope to see more Germans carrying the flag below and being uncompromising with their ‘leaders’ open door policies.  Deport these mobs, while you still can.  Save Germany – save Europe – save yourselves.  The alternative is rolling over for cultural suicide. 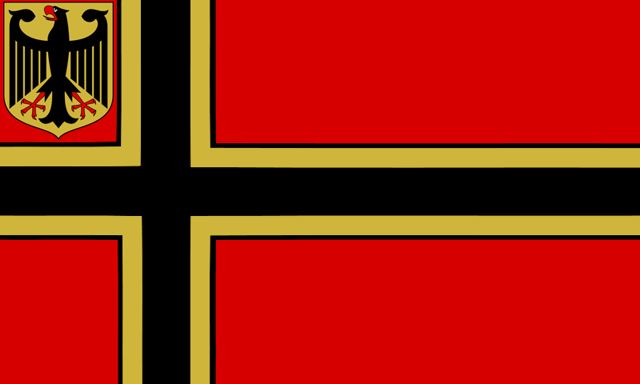 If you don’t, before these mobs are through with you, they will have turned your country into what their’s looked like before they left it and what your parents and grandparents had to contend with after they were overrun.

P.S.  This has nothing to do with muslims.  I would be saying the same thing were Germany to (for some reason) take in millions of Americans or Argentinians.  Germany’s institutions, finances and very culture would, in short order, be changed forever – destroyed, in fact – were an inordinate number of gate crashers allowed to come in and destroy the demographic, bleed the system and force it to allow for the odd customs and personality traits of outsiders.